I'm More Than Some Pretty Face Beside a Train

Okay, so I've had a little time to think about this whole Ben Affleck being Batman thing. I'm sure you've heard by now...the whole internet exploded when it was announced...seriously, it really interrupted my fangirl on Tumblr time, and I don't have a lot of that right now...

Anyway, I think everyone's being a little harsh. Has he made some bad films? Sure. Is he who I would have pictured? Not at all...but I thought the same thing about Toby Maguire being Spiderman and look how that turned out. I think there's some things that people forget- like how actors have no control over how a movie is produced if they aren't one of the producers. Or how Affleck has made decent movies. And how he's directed some good ones too- that bodes well for the script. And don't point out Gigli to me. That was all JLo and you know it. You throw the first stone on that one if you've never done something seriously stupid because of the very hot person you were dating. Yeah. Mostly, I think everyone forgets that people make mistakes. Even actors choosing movies.

Look at Meryl Streep- she's amazing, right? But she's got The Ant Bully, Mamma Mia, The River Wild and A.I. on her acting credits. Its almost enough to make you forget how great she can be.

Or how about Johnny Depp? Did you see The Lone Ranger? Or how about Alice in Wonderland (which he's filming the sequel to) or Charlie and the Chocolate Factory, or The Secret Window. All horrible movies. And just think, if he hadn't made so many great films before and these were all you'd ever seen, there would be no Captain Jack Sparrow, no Corpse Bride or Sweeney Todd.

Yeah, Yeah, I hear you saying. But those two weren't given iconic superhero roles. They aren't risking ruining years of great actors and cannon....they aren't destroying a franchise. First- the Batman franchise is rife with horrible Batmans- hell its rife with horrible casting decisions. Its the truth and you know it. Come on, Val Kilmer? He's pretty, but he was an awful caped crusader. Uma Thurman, Alicia Silverstone, and Arnold Schwarzenegger should come to mind for you too. Terrible. And look at the actresses who have mangled Cat Woman...Michelle Pfeiffer, Halle Berry and Anne Hathaway. All amazing actresses. All shitty Cat Women. Honestly, I don't think anyone will ever do it as well as Julie Newmar did in the sixties...but that's just me. Point is, sometimes it takes more than being a great actor to portray a great part. Otherwise I wouldn't weep every time I think of George Clooney and his batnipples. You think he picked those out? Yeah, neither do I. Hell, if acting ability was the only criterion for getting an iconic part we'd have never seen Terry Hatcher as Lois Lane..... For that matter we'd have never seen Jim Carry as the Riddler or Danny Devito as The Penguin (and both were great) if their crimes against film had been the criterion by which they were given their roles.

And for the record, I would like to offer you the following in defense of great actors who played iconic superhero/supervillain roles but have shady pasts. Imagine if we had judged the following based on their bad movies alone:

Before American Beauty we loved Kevin Spacey for Midnight in the Garden of Good and Evil and The Usual Suspects. But let's face it, if we judged him based on A Bug's Life and L.A. Confidential, we'd have never seen him as Lex Luthor.

Outside of To Wong Foo, Thanks for Everything, Julie Newmar has Wesley Snipes made a decent film? Outside of the Blade movies, for which , of course, he would not have been cast....

Remember Alfred Molina's riveting performance as Doc Oc in Spiderman? We'd have never seen it if the internet had been the judge, because all he had done prior was crappy television shows and Chocolat (another Johnny Depp crime, I might add).

And believe me when I say The Avengers cast wouldn't exist. Tom Hiddleston was a relatively unknown television actor, much like Molina. Look at him now....Can you think of anyone else being Loki? There would be no Iron Man because (face the music kids) RDJ didn't make anything decent post Chaplin (1992) until around 2005. He did, however, make an appearance in that god awful Halle Berry film Gothicka and he contributed to the further degeneration of an entire generation of yuppies by doing a 25 episode stint on Ally McBeal. But we worship him as Iron Man (and Sherlock Holmes). Lucky the internet wasn't there for those casting decisions. If you thought Mark Ruffalo was a way better Hulk than Edward Norton congratulations. Remember, though, Norton is a spectacular actor who had tons of great films to his name before he bombed as Hulk. Ruffalo had Just Like Heaven and 13 Going on 30 to his name....Chris Evans can't be Captain America anymore because Fantastic Four was a crime against humanity, I'm pretty sure there's a UN council still debating whether or not that movie violates the Geneva Conventions....Oh, and no Black Widow, because Scarlett Johansson still needs to be punished for The Other Boleyn Girl and The Nanny Diaries.

I think I made my point.

You know, I don't even really care for Affleck as an actor. He's okay, but I don't think he's done anything groundbreaking. What I do know is that he deserves a chance before we say how much he sucks. A year or two from now, maybe I'll be eating my words...but if I am, I'll let you tell me that you told me so. Honestly, I'm sick of the people on the internet, and fan bases and other groups of, oh say, non-film people, thinking they know better than Hollywood on how to entertain us. I think it contributes to all the bad films we see, and bad television too- there's too much pandering to what they think people want. The loud and vocal majority of morons are ruining entertainment for the rest of us.

Let it go. Its just a movie.

If you hate him that much, don't go see it.

Email ThisBlogThis!Share to TwitterShare to FacebookShare to Pinterest
Labels: entertainment, rants, the internet

Its been a busy week. I've meant to blog for several days now and the time keeps getting away from me.

The short version is I've been taking care of some orphaned kittens and I redid my living room.

But a picture is worth a thousand words, right? 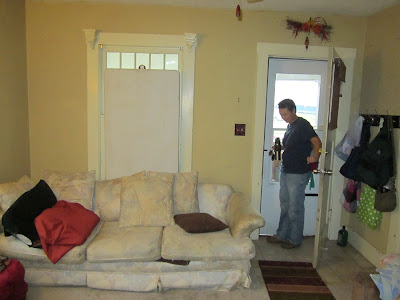 So I took down most of the stuff on Tuesday night while we were watching America's Got Talent, which is why there are no curtains on the window. That's kitten sneaking out the door to her lovely new job. See that coffee in her hand? I brewed it! 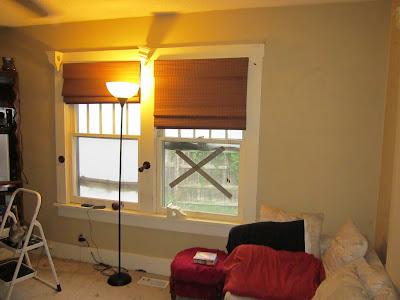 That the wall that never had much on it, 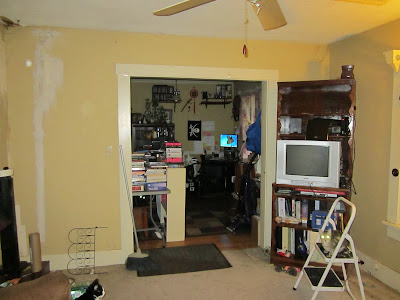 That's the archway into the Library (read: used to be the dining room) 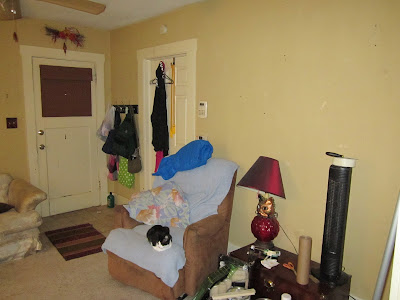 There's the captain's chair (yep, Star Trek reference) and Cookie chilling out, waiting for me to move it. Behind her, the door to the bedroom. 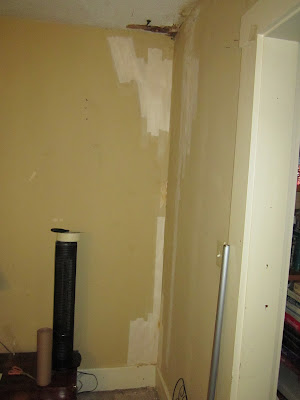 The bookshelves used to be over here. The wall was in need of serious repair. I patched it during AGT. I didn't mind it too much...except I looked up during the last act and realized that Howard Stern was looking extra nice on that episode. Of course I missed it. I keep reminding myself there's a whole season...

So I got back to the corner and to work. 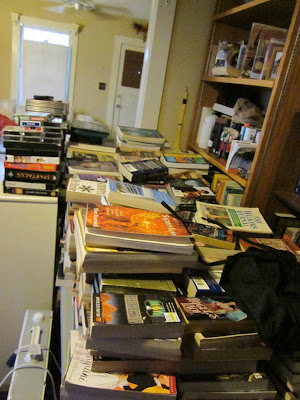 This might, maybe, be the books from the living room, sitting on a table in the dining room. They might also be so heavy I was worried about breaking the table they were on. I haven't actually counted them, but I'm thinking there's somewhere in the neighborhood of 350 books there. Minimum.


The dust I kicked up moving them...nope. 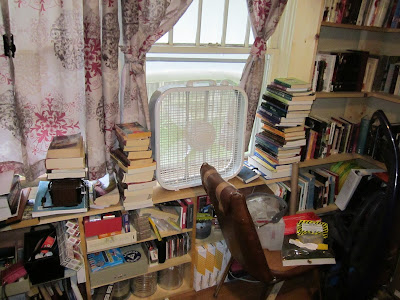 This might be the window in the library, where I had to stack more books because I ran out of space on the table. 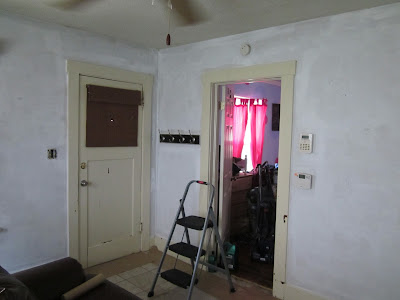 This is the walls, nice and primed. 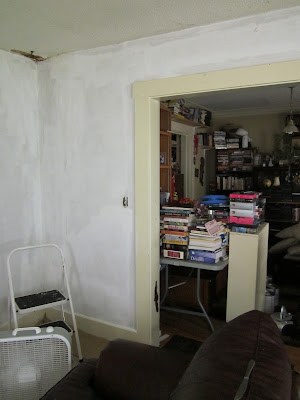 I think we did an okay job of it, really. 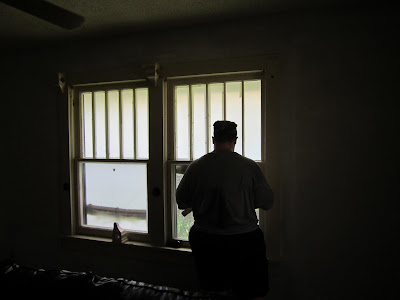 There's the back of Bobcat as she removes my sconces so she can paint them. 'Cause she's awesome like that. 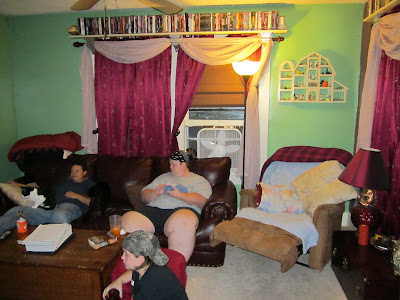 There's the new green wall. In this light it looks way brighter than I think it looks normally. But its fine either way, because its much cleaner looking. Speaking of clean, you wouldn't notice but I shampooed the carpets too.

There's Kitten, Bobcat and Oscelot watching the AGT results show. I'm pretty sure Bobcat is holding a kitten. She's sitting on that nice leather couch I got. Isn't it pretty? 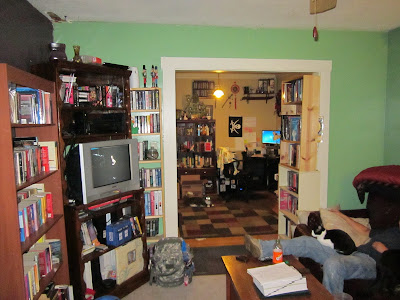 There's the entry to the library now I like that we relocated the television. I think it makes the space look much cleaner.

Also, having moved those bookshelves, I'm pretty sure I have room for two more, if I play my cards right. 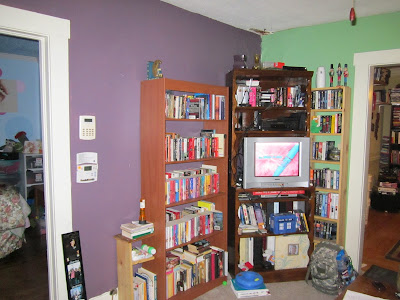 There's the new corner. I love that purple color.  If you look to the left you can see my blue and pink polka-dot bedroom. Super girly, just like my new living room. 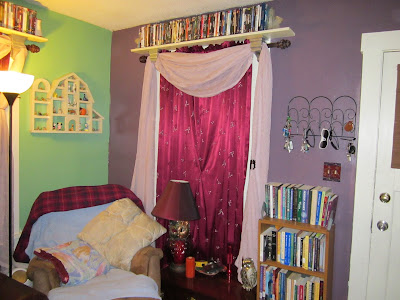 There's the new entry. The key holder is actually a little garden fence. We just bent the scrollwork in. Nice, right? Also, way more room for all the keys.

The captain's chair looks much more official from that corner.

I might have saved the pillows off the old couch so that I can recover them and reuse them.

I've also spent my time not cleaning and kitten minding reading the first book in Robert Jordan's Wheel of Time series with Swisslet. That's pretty much all of my time.

So...what have you lot been improving?
AGxx
Posted by Alecya G at 12:01 PM No comments:

Who Are These People?

Places I Visit (The Awesome)

If Ancient History Interests You

Looking For A Specific Tour?